Richard Prince has been in our little artistic sphere since the 1980s, but he’s periodically seemed a little distant—almost like he was speaking in the third-person. Then in 1998, Richard started making his Hippie Drawings, digging into his own kids’ sketches along with his “dead head” figures of the early seventies for inspiration. We saw these smiling, wide-eyed, open-armed hippies in his Hippie Drawings book when we were in the early stages of developing Katz + Dogg and something clicked. Just as kids have a way of pulling you in even when they’re deep in their own creative thing, cannabis can aid in carving out your own headspace but is also inherently social, bringing all of us freaks together. 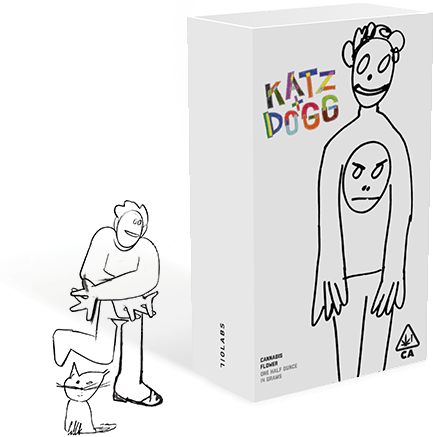 One Half Ounce 14 Grams When I saw that Richard was doing a series of “Hippie” covers for High Times in 2016TK was when I first knew he should play a part in Katz + Dogg CannabisTK. Richard once described being at Woodstock spinning around with a camera and taking pictures of the crowd—how he thought about Robert Rauschenberg encountering Ad Reinhardt’s black paintings and rotating until he stopped at one work and said, “I like that one.” I think Richard approached those early “dead head” drawings with that same kind of freedom and openness. And the Hippie Drawings too!

We’ve long believed that cannabis should do better. Wrapping and trappings shouldn’t feel threatening but inclusive, while assuring you of the high caliber of the flower you’re about to enjoy. Katz + Dogg is thrilled to partner with Richard Prince for the release of the meticulously sourced and tested, mellow but satisfying cannabis you now hold in your hand. Flower, pens, and papers for friends who like to do their own counterculture thing together. Be here now—however you want!